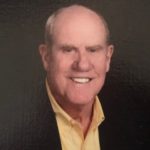 David Haines Conrad was born December 24, 1942, in Glen Ridge, New Jersey, to John and Jeanne (Smith) Conrad. He passed away July 21, 2020, at Lakeland Hospital Hospice Center, in Elkhorn, Wisconsin. after a long and courageous battle with kidney failure, COPD, and lu…read more

David Haines Conrad was born December 24, 1942, in Glen Ridge, New Jersey, to John and Jeanne (Smith) Conrad. He passed away July 21, 2020, at Lakeland Hospital Hospice Center, in Elkhorn, Wisconsin. after a long and courageous battle with kidney failure, COPD, and lung cancer.

Dave was a super guy who enjoyed all sports as a participant and spectator. He was an excellent golfer, bowler, basketball player, and ping pong player, participating in the Transplant Games in Madison, Wisconsin, where he placed second in the tournament. He loved boating, travel, the Cleveland Indians, The Ohio State Buckeyes, jigsaw puzzles, and crossword puzzles. He loved playing all kinds of card games on his iPad. Dave was an excellent chef, both in the kitchen and outdoors on his trusty Weber charcoal grill.

Dave loved his many friends and most of all his wonderful family. He spoiled his wife Sandi, the luckiest lady in the land. He had a long successful career in the insurance data management field, retiring in 2004 after 17 years as president/CEO of the National Independent Statistical Service in Indianapolis, Indiana.

Dave and Sandi lived in Arlington Heights, Illinois, and Carmel, Indiana, before retiring to Williams Bay, Wisconsin, in 2007. They built a beautiful house on the site of their cottage, which they had owned since 1987. Dave was active in the United Church of Christ, serving on the finance committee (chair) and as treasurer. He was also an active member of the Royal Joy Williams Questers, the Walworth County Arts Council Board, the Cedar Point Park Association Board, and the Aurora Lakeland Medical Center Foundation Board, and he had the great joy of singing with the Country Gentlemen Barbershop Chorus. He was President of the Country Gentlemen for 2 years.

Dave was a kidney transplant recipient (brother Geoffrey) for 31 years. He developed, with his wife, Sandi, G.O.A.L. (Gift of a Lifetime), a school program to educate children at an early age about the importance of organ donation.

Dave is survived by his wife Sandra (Kloss), whom he married November 20, 1976, in Wheeling, Illinois; his daughters Deborah Conrad (John Galvin) and Jennifer Conrad Seidel (Kevin) and his son Christopher Conrad (Jodi Prior); grandchildren Kate, Jackson, Matthew, Riley and Cooper; brothers John (Janet) and Geoffrey (Maureen), his uncle George Conrad, as well as many nieces, nephews, and cousins. He was preceded in death by his parents, John and Jeanne (Smith) Conrad.

Dave will be missed by his loving family and friends for his great sense of humor, his infectious laugh, his loving and caring nature, his generosity, his incredible energy, and his desire to “give back” for all his blessings through volunteering.

For Sandi, he was the love of her life, and she was so blessed to have had him with her for 43 years. She will miss his unconditional love for her, his care for her, and his protection. Life will never be the same.

Many thanks for the wonderful care from the nurses and staff at Aurora Lakeland Medical Center and Aurora at Home Hospice Care Team.

Because of the pandemic, there will be a small memorial for immediate family by Zoom. There will be a celebration of Dave’s incredible life at a later date for family, extended family, and friends.

Because of the pandemic, there will be a small memorial for immediate family by Zoom. There will be a celebration of Dave’s incredible life at a later date for family, extended family, and friends.

Help tell the story of David 's life by contributing to the Life Event Timeline. Upload the photo of an event...

Ron Johnson/Ellie Morgan posted on 8/13/20
We extend our sympathy to Sandi and the family. Dave was a very special friend that we enjoyed over many years. Had many fun business trips together and personal get togethers with lots of great experiences and many laughs. We treasure the memories!! We will miss Dave greatly!!
Ron and Judy Pieper posted on 8/4/20
Extending our sincere sympathy to Sandi and the family. Remembering Dave and our special friendship over these many years, starting with NAII. The fun, the trips together and all the laughs we had. We treasure the memories!! We will miss Dave, his humor, caring and friendship.
Joan Kearnaghan posted on 8/3/20
We are so sorry that Dave has passed, but we know he will be in a better place. We have so many wonderful memories of our time with Dave and Sandi. We had lots of good times playing golf, but the best memories we have involve attending University of Illinois football games. Sandi and I both had great memories of our times in college, and the games provided us with a chance to spend a day together, enjoying the U of I band...especially the pre-game drum concert. We enjoyed our visits to Sandi and Dave's homes. The lake home is very beautiful, so we are glad that we were able to see it, even after we moved to Florida. I will always feel bad that Dave got sick when they stayed in our condo in Ft. Myers. We had so looked forward to more golfing with the two of them.
Jonathan Williams posted on 8/2/20
I have been fortunate to have had a long and enjoyable friendship with Dave, starting with my time serving on the NISS Board. I had many opportunities to ask Dave for advise and feedback as I dealt with issues that arose in my management activities. I considered Dave to be a mentor to me in many ways during the course of our friendship, first as business associates and later as friends in retirement. I will miss Dave greatly!
Avon and Devin posted on 7/29/20
Beside being a great golfing buddy, Dave was also a great singing buddy. Our quartet, Retropolitan (I never did figure out what that name meant) was so much fun. And I apologize once again for not getting the "Time" right! Please take your time, Sandi, in recovering from all that has transpired recently. Avon and I are always but a phone call away. We will miss you, buddy, Avon and Dev
‹ ›
View All Condolences Post a Condolence
Nelson Funeral Homes & Crematory