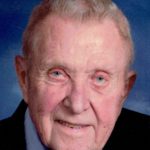 He grew up on his family’s farm in Lisbon, IL, the son of Elias and Lida (Shurson) Orton. He spent nearly his entire life in Kendall County where he was a business owner, member of the Yorkville (now Trinity)…read more

Duane was in the U.S. Army in the mid-1950s, serving mostly in Menomonee Falls, WI, where he liked to say he “guarded the Milwaukee breweries.” He also played on a traveling Army softball team. He played softball until he turned 60 and was proud to have played the sport in six of his eight decades.

What began as a part-time job at Lisbon Implement, a farm implement dealership, became his career. He eventually bought the business and ran it until his retirement in 2006.

Duane was active in the United Methodist Church, serving in many roles over the years and spearheading the Committee for the Future which helped secure land for the new building.

He spent six years on the Yorkville School Board and another six on the Kendall County Board. He was active in Lions Club, serving two terms as president. He was often found selling candy, helping out at the swim club and calling bingo.

Duane was a lifelong Chicago Cubs fan, who fell just short of seeing a game in every major league park. He enjoyed gardening and loved nothing better than to share what he had grown. After retiring, he spent most Thursday mornings at a Yorkville restaurant, drinking coffee with his friends and solving the world’s problems.

He loved to tell stories, oftentimes losing the point of the story midway through it. And though he often said, “to make a long story short . . .” he never did.

Duane is survived by his wife Audrey (Fletcher), whom he married in 1966; his three children, Katherine Orton of Washington, D.C., Karen (Douglas) Bacchi of Andover, MA, and David Orton of Yorkville; and his three grandchildren, Justin, Lucas and Anna Bacchi. He is also survived by his brother, Eugene, of Lisbon, IL, and many nieces and nephews. He was preceded in death by his parents, his sister Evelyn Gunderson, and his brothers Orville and Laverne Orton.

A memorial service will be held at a later date. Memorial contributions may be made to Trinity Church United Methodist, 2505 Boomer Lane, Yorkville, IL, or the Yorkville Lions Club.

Help tell the story of Duane's life by contributing to the Life Event Timeline. Upload the photo of an event...

Jerry and Kris Farber posted on 7/30/20
To, Audrey,David, and the rest of the Orton family. You are all in our thoughts and prayers. I really enjoyed talking basketball and rooting together for the Foxes with Duane. He will be missed, but not forgotten. Sincerely, Jerry and Kris Farber
Cindy Felix posted on 7/27/20
Our deepest sympathy, love and prayers to Audrey and her family on the passing of their dear husband and father! Earl and Cindy Felix
Frank & Carol McKeever posted on 7/26/20
Everyone loved Ortie. I played with him and against him. You know how well he was liked. Back when it was ok to level the catcher I ran into him and we both went down and all my teammates rushed the field to make sure Ortie was Ok. We will all miss him. Frank McKeever
Frank & Carol posted on 7/26/20
We were saddened to read of "Ortie's" passing. He was a good friend of many years and we know will be sorely missed by his family and his community. Our sincere sympathy and condolences go to Audrey and his wonderful family. Know that we are thinking of all of you as you cherish his memory.
Carol Hanson posted on 7/25/20
My deepest sympathy to the Orton Family. Memories will be cherished by all that knew him as he touched so many lives. God bless all of you.
‹ ›
View All Condolences Post a Condolence
Nelson Funeral Homes & Crematory