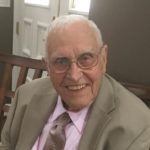 Olaf Gjovik died peacefully in his home, surrounded by friends and family, on Wednesday, July 22, 2020, at the age of 98.

By any definition, Olaf lived a full and blessed life, and anyone who knew him felt the happiness he spread to everyone he met.  He had a warm smile and his laughter was infectious. Olaf was ren…read more

Olaf Gjovik died peacefully in his home, surrounded by friends and family, on Wednesday, July 22, 2020, at the age of 98.

By any definition, Olaf lived a full and blessed life, and anyone who knew him felt the happiness he spread to everyone he met.  He had a warm smile and his laughter was infectious. Olaf was renowned for his great storytelling and sense of humor.  He was a man of deep faith and was devoted to his church.

Olaf’s life began on a small farm in northern Minnesota when he was born on May 2, 1922.  And while the work was hard and the family had few luxuries, Olaf always remembered these days fondly.  That’s because he was surrounded by two loving parents and nine brothers and sisters who would fill their time with laughter, music and faith.

After Pearl Harbor, Olaf joined the Navy and was stationed on Midway Island as a Submariner during WW II.  In 2016, his war service was honored by the Navy, when he was made an Admiral for a day to help christen the brand-new nuclear submarine, the USS Illinois.

After the war, Olaf left the service to marry his sweetheart, Florence Kustron Gjovik, (deceased 2010).  He met Florence while training at the naval base near Chicago. They had an amazing marriage of 64 years, that resulted in 5 children, 9 grandchildren, 12 great grandchildren and 3 great-great grandchildren!  Florence and Olaf were very much partners in the development of a successful auto dealership business that grew into a 22-acre autoplex that consisted of seven new-car franchises that employed over 100 people in the Sandwich-Plano area of Illinois. In 2018, General Motors recognized Olaf’s fifty-year partnership with GM at a special ceremony with multiple awards and citations. Through the years, the surrounding towns felt the benefit of Olaf’s generosity as he sponsored sports teams, donated cars to charities, and supported the Open-Door Rehabilitation Center, Fox Valley Older Adult Services, and countless other charities.  He was a founding member of the Sandwich Rotary Club and held various positions culminating in President.

Olaf loved woodworking, boating and camping, hunting, riding motorcycles (well into his 80’s) and he often hopped into his motorhome to visit family around the country. He went to work most days and once joked that “his excellent crew really did not need him there, but they couldn’t get rid of him.”  And, on Sunday afternoons, Olaf could be found rooting for his favorite Green Bay Packers.

Olaf has been a devoted and generous patriarch to every generation of his large family. He is survived by his beloved Candy, his youngest brother, Lee; as well as his 5 children: Judy Gjovik Westphal (Oswego), Jan Gjovik Fensterer (Fredericksburg, VA.) Mark Gjovik (Newport Beach, CA), Scott Gjovik (Oswego), Dawn Gjovik Harding (Dekalb) and all of his grandchildren, great grandchildren and great-great grandchildren.  An amazing legacy.

A light has gone out in the world, but there is a new shining star in the heavens.

Due to COVID-19 issues, visitation and funeral service will be held privately by the family. In the future, when appropriate, the family plans to hold an event to celebrate the magnificent life of Olaf E. Gjovik. Details to follow.

In lieu of flowers, Olaf has requested that donations be made to the Open Door Rehabilitation Center in Sandwich, IL, Fox Valley Older Adults, Sandwich, IL, Fox River Lutheran Church, Norway, IL, or the Salvation Army.

Help tell the story of Olaf's life by contributing to the Life Event Timeline. Upload the photo of an event...

Thomas Luther- Grand Mound, Iowa posted on 8/13/20
So very sorry to learn of Mr. G's passing. I worked for him for a few years in the early 1990's and what a kind and generous man he was. He always had a joke to tell or a story to share. His wisdom and kindness has not gone unmarked in my life. When I left the business to become a funeral director he offered great encouragement to fulfill my goals and dreams. I have since retired and am now back in the car business thanks to the fine lessons I learned from his generosity. (8 great years...well done good and faithful servant! You will indeed be missed. Give Mrs. G a big hug and say hello to my parents. TO all the Gjovik clan-- you were fortunate to have such a great role model in life! My prayers and thoughts are with you all.
Merle Lorenson posted on 7/25/20
I have known Olaf as Butch my whole life. He would come to his birth town of Strathcona, Minnesota almost annually. It was a pleasure every time I got to see Butch. His passing took a part of my heart with him. Though I seldom saw him, I loved him like a second dad. Rest in peace Butch, you will be missed
Leonard Wass posted on 7/24/20
Olaf was an inspiration to us all. As a fellow submariner we had an unbreakable bond, even though separated by 20 years in age. He was always cheery, intellectually bright, conversant, and kind to all. Kathy and I cruised the St. Lawrence River with him and Candy from Quebec City to Toronto. A wonderful time. At the commissioning of the new nuclear fast attack submarine, the USS ILLINOIS (SSN-786), Olaf was a star. He went front and center and pinned brand new "dolphins" (submarine-qualified insignia) on the chests of several proud young sailors attached to the boat. He will be missed by all. May he rest in God's hands for eternity. Captain Leonard Wass, USN (Ret) and wife Kathy Wass
Patti Churchill posted on 7/24/20
Olaf touched my soul in so many ways. So kind, so thoughtful, so loving. You will be greatly missed by me and so many other people! May you rest in peace Olaf. Heaven has gained one special Angel!
‹ ›
View All Condolences Post a Condolence
Nelson Funeral Homes & Crematory