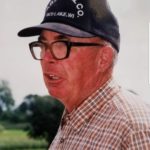 Of Harvard, formerly of Sharon

Orson was born February 2, 1928 in Sharon, Wisconsin to Adam Lester and Josephine D. (Stoxen) Weaver. He passed away on Friday, February 8, 2019 at his home in Harvard, Illinois.

Buck” Weaver, as he was known to his harness racing friends…read more

Of Harvard, formerly of Sharon

Orson was born February 2, 1928 in Sharon, Wisconsin to Adam Lester and Josephine D. (Stoxen) Weaver. He passed away on Friday, February 8, 2019 at his home in Harvard, Illinois.

Buck” Weaver, as he was known to his harness racing friends and family, was a lifelong resident of the Sharon, Wisconsin, area.  A graduate of Sharon High School, Buck was drafted into the tail end of WWII, and eventually used the GI Bill to earn a bachelor’s degree and teaching certificate from UW-Whitewater.  Buck taught high school social studies and coached several different sports at Seymour High School in Seymour, WI. After leaving Seymour and the teaching profession, he enjoyed running into former students on his travels around Wisconsin and attending class reunions.  Buck continued to be a devoted fan of high school sports. For many years, he rarely missed a basketball game at Harvard High School, which his children attended.

Buck eventually purchased a farm south of Sharon, WI, and installed a half-mile racetrack.  For the next several decades, he broke, trained, and raced harness horses, for himself and a few other stables.  Most notably, Buck broke yearlings for Merlyn Welch of Sharon and the Busse Stables of Kirkland, IL. One of their most successful ventures together was Roxburgh Bob, one-time winner of the Maywood Pace. Later on, Buck had horses with the Nolens of Harvard, IL.  He will always be remembered for the Jesters and Friscos, foals born and broke to race on Buck’s farm. Buck’s children, Sara and Wayne, grew up training and racing horses alongside their father, and continue in the business to this day.

In addition to training and racing horses, Buck was known throughout the Midwest as an announcer of harness races.  Even though he was offered the chance to call races at the pari mutuel level on multiple occasions, he preferred the county fair circuit, as it allowed him to be home with his wife and children.  Buck called races primarily in Illinois and Wisconsin, but ventured into Michigan and Iowa several times. For almost 60 years, Buck was known as the voice of the Northern Illinois Colt Association, and also served on its board of directors.  In addition to his well-known catchphrases, such as “Heeeere they come” and “There’s pacers coming from everywhere,” Buck was known as a historian of Midwest harness racing and a great storyteller. In acknowledgement of his ability to entertain grandstand crowds with lessons and stories, the Wisconsin Harness Horse Association inducted Buck into its Hall of Fame in 2004.

Orson is survived by his children Sara M. Weaver and Wayne L. Weaver as well as many cousins.

He was preceded in death by his wife, Lucille “Lucy” and his half-sister Annetta Speiss.

Help tell the story of Buck's life by contributing to the Life Event Timeline. Upload the photo of an event...

Marge Tinsley posted on 2/15/19
The Tinsley family, (Marge, Kevin, Dara) are so sorry to hear of the passing of O. L. “Buck” Weaver. John really enjoyed working with Buck, and the sport has lost another “great” along with Gene Montgomery’s recent passing. Deepest sympathy to Sara, Wayne, and the rest of Buck’s family and friends.
Don Wallace posted on 2/14/19
Buck is an icon with a great memory and extreme talent for embellishing races he called and specifics were essential always in the best interests of the sport that helped him become an older gentleman. He had the voice. He cared. To your family they will miss you with love and appreciate the strength you gave them. Thanks Buck!!!! Don Wallace
Charles Kjelland posted on 2/13/19
My deepest condolences to the Weaver family for the loss of Buck. Although a few years older than me, we were great friends when I lived in Sharon across the street from him. Attended horse races and fairs with him several times, and would see him at Emmys restaurant a lot.
Robin Weber Pardus posted on 2/12/19
Sorry to hear of Buck passing. Thoughts and prayers to all.
Sam Hodgett posted on 2/12/19
Buck will be very missed. We had many long visits and what one of us couldn’t remember the other did. Sandy’s and my condolences to his family.
‹ ›
View All Condolences Post a Condolence
Nelson Funeral Homes & Crematory