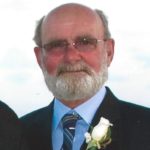 Richard was united marriage to Guillermina “Mina” Cepeda Rodriguez and they spent many happy years together. He was employed as a superintendent by Caterpillar, Inc. in Aurora, IL until his retirement. Richard enjoyed riding his Harley motorcycle, boating, and sports cars. He was a loving, husband, father, step-father, grandfather, great-grandfather, brother, and uncle who will be deeply missed by his family and friends.

He was preceded in death by his parents Glenn and Frances Vines; his brother, Brian Vines; his sisters, Glenda Vines and Susan Slater; and his niece.

Funeral Services will be held at 10:00 AM on Saturday, February 29, 2020 at the Nelson Funeral Home, 1617 N. Bridge St., Yorkville, IL. Interment will follow in the North Clinton Cemetery in Waterman, IL.

In lieu of flowers memorials may be directed to the charity of the donor’s choice.

Help tell the story of Richard's life by contributing to the Life Event Timeline. Upload the photo of an event...

Rod Van Fleet posted on 3/7/20
I was deeply saddened to read of Rich's passing having just seen you Mina at Cheri's wake. I truely hope the memories you had together will carry you forward until you meet again. God bless you Mina and your entire family at this most sorrowful time..you are in the thoughts and prayers of the many who knew you both.
Stephen Lynn Gregory posted on 3/2/20
I was one of the workers in the big CAT house as was Rich. It is sad that all we knew and worked for has gone the way of the Aurora plant. I knew Rich as a coworker and hope his life when he retired was all he and his family wished for. As we age our outlooks change we let our feels go to a more gentle state. I wish the family fond memories of Rich and that he is now at rest with our Lord.
Gary Quarnstrom posted on 2/28/20
Rick was my best friend is high school and into my early adult years until I left Waterman permanently, and then we drifted apart . I have missed his company for years and searched for him online many times with the hope of reuniting with him and to rekindle our friendship.
Ed Campbell posted on 2/27/20
Losing a family member is often a heart shaking time for family members. May the Vines family's grief be overshadowed by the wonderful memories of sharing with Mr. Vines.
‹ ›
View All Condolences Post a Condolence
Nelson Funeral Homes & Crematory