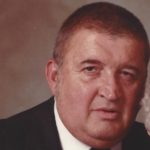 Robert was united in marriage to Bonita Toepper and they spent the next many happy years together until her passing in 1988. He was than later united in marriage to Char Williams and they were happily together until her passing in 2015. Mr. Tison was a Veteran of The United States Navy. He was formerly employed for many years as a Meteorological Technician for the National Weather Service. Robert was a loving husband, father, grandfather, great-grandfather, brother, and uncle who will be deeply missed by his family and friends.

He was preceded in death by his parents, Leon and Margaret Tison; his spouses, Bonnie Tison and Char Tison; also a brother, Glenn Tison.

Help tell the story of Robert's life by contributing to the Life Event Timeline. Upload the photo of an event...

Be the first to share a memory of Robert.