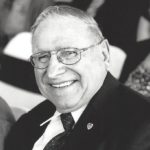 Vernon Edward Herrmann, age 89, of Hinckley, IL passed away on Tuesday, February 4, 2020 at the Grand Victorian of Sycamore in Sycamore, IL. He was born in Burlington, IL on September 9, 1930, the son of Joseph L. and Emma (Drendel) Herrmann.

Vernon was united in marriage on June 21, 1952 to the former Mary A. Goken…read more

Vernon Edward Herrmann, age 89, of Hinckley, IL passed away on Tuesday, February 4, 2020 at the Grand Victorian of Sycamore in Sycamore, IL. He was born in Burlington, IL on September 9, 1930, the son of Joseph L. and Emma (Drendel) Herrmann.

Vernon was united in marriage on June 21, 1952 to the former Mary A. Goken, and they spent the next 64 years happily together until her passing on February 8, 2017. Vernon was a member of St. Katherine Drexel Catholic Church in Sugar Grove, IL. Mr. Herrmann was a lifelong farmer in the Hinckley area. He also worked locally as a carpenter and later worked for Hinckley Concrete. Vernon was a loving husband, father, grandfather, great-grandfather, brother, and uncle who will be deeply missed by his family and many friends.

A Funeral Mass will be held at 10:00 AM with a viewing from 9:00 until 10:00 AM on Monday, February 24, 2020 at the St. Katherine Drexel Catholic Church, 8S055 Dugan Road, Sugar Grove, IL with Father Robert Jones, officiating. Interment will follow in St. Paul’s Catholic Cemetery in Sandwich, IL.

In lieu of flowers, memorials can be made to the Vernon E. Herrmann Memorial Fund, addressed to the Nash-Nelson Memorial Chapel, 141 N. Maple Street, Hinckley, IL.

9:00 AM Viewing until the time of Service.

Help tell the story of Vernon's life by contributing to the Life Event Timeline. Upload the photo of an event...

Leonard and Elaine Johnson posted on 2/21/20
Our sympathy goes out to the family. We enjoyed knowing Vernon. You can be proud of your parents. Vernon and Mary exemplified the values that are associated with bringing up a family on the farm.
Maribeth Sprinkle posted on 2/19/20
My Deepest Sympathy To The Herrmann Family!
Rosemary & Mike Rissman posted on 2/19/20
Dear Janice: We enjoyed playing cards with your dad and mom so much! So very sorry that we did not stay in closer contact with your dad this past year! Love & sympathy!
Barbara Goken posted on 2/18/20
I am sorry to hear about Vernon!! He was sure a good guy! I know he loved his wife, Mary, very much. I have pictures of them dancing. I could always count on them if I needed something, Mary was a wonderful cook. Please know I I love you alll and am sending warm hugs!!
Barb Hamilton posted on 2/18/20
Jan, so sorry to hear of the loss of your father. I know it is hard, but remember all the good times you had and know they are in heaven with other loved ones. I like to imagine my relatives are all having a wonderful game of pinochle! Sending you loving thoughts.
‹ ›
View All Condolences Post a Condolence
Nelson Funeral Homes & Crematory