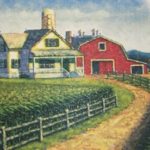 Walter R. Huff was born August 22, 1930 in Richmond, Illinois to Gertrude and Walter Huff, Sr.  He passed away peacefully, with his family by his side, on Monday, September 14, 2020 at Mercy Walworth Medical Center.

Walter was a diligent farmer his entire life, with a great love of the land and th…read more

Walter R. Huff was born August 22, 1930 in Richmond, Illinois to Gertrude and Walter Huff, Sr.  He passed away peacefully, with his family by his side, on Monday, September 14, 2020 at Mercy Walworth Medical Center.

Walter was a diligent farmer his entire life, with a great love of the land and the animals.  He was well known for being the happiest man on the prairie; greeting everyone with a smile and a wave.  He also filled his spare time working at Kretchmers Lumber, tended bar at the South Side Bar and was an avid tractor puller with Wally’s Pride and Joy.

Wally spent the last 48 years of full time employment at Ellis Farms of Walworth, performing all the normal duties and a few abnormal ones: being mauled by a bull, falling off a tractor, replacement of a knee, a hip, and a heart valve as well.  Still, though all that he has never had a bad day.  Many times he would say he was the luckiest man alive to be able to have a job he loved his entire life.  “It’s not work if you love it!!!”

Walter is survived by his wife Betty (Knull), whom he married on August 19, 1972 in Harvard, Illinois.  They shared 48 happy and joyful years of marriage, raising two beautiful daughters, Jeanette and April and a step-child Charlie; a brother Ken; and lots of grandchildren, great grandkids, and many nieces and nephews.

He was preceded in death by his parents; three step children Stormy, Linda, and JoAnn; five sisters; Clarice, Irene, Dorothy, Florence, and JoAnne; and two brothers Arnold and Earl.

I don’t know if anyone else felt the world stop for that split second Monday night at 8:17 pm; but that was the moment when the Father, Husband, Grampa, Uncle and Friend of every one waved his last wave, smiled his last smile, and said his last goodbye to the world he called his own.  The Happy Farmer.

Funeral Service will be held at 11:00 AM on Monday, September 21, 2020 at the Toynton Funeral Home, 328 Kenosha, Walworth, WI. Interment will follow in the Walworth Cemetery in Walworth, WI.

Help tell the story of Walter's life by contributing to the Life Event Timeline. Upload the photo of an event...

Fred and Deb Hodnik posted on 9/17/20
I will always miss the wave and smile from Wally as I drove by the Ellis farm. He so loved his work, and he had such a zest for life. He was so inspiring. I always loved talking to Wally because he had a way of always making you feel better. I remember sitting watching Wally till(between the rows of corn) with the convertible tractor, and he was going quite fast. And he never hit a plant. I was totally shocked by how he could go so fast and not hit a plant. Well... he was just that good. I would run over with a beer for him and just sit and chat with him a bit. We will miss his smile and wave. But I'm sure he is smiling and waving at everyone from Heaven. Our condolences to the Huff family.
LuAnne Powell posted on 9/17/20
Many memories made with Uncle Wally from when I was very small to the last conversation I had with him. You wrote it well that he always had a smile and a wave even when I zoomed by him in the dump truck tooting my horn as he made his way down the road on a tractor. Loved talking to him and he will be truly missed by many. You all are in my thoughts and prayers. Love- LuAnne Powell
Mike Peters posted on 9/16/20
Wally was the best and will be missed by everyone he knew. . He never failed to wave if we drove by a field he was working in, and I have enjoyed many cheerful visits with Wally over the years. Wally spread joy to everyone he came in contact with. We are truly saddened by his passing. Mike and Lana Peters
‹ ›
View All Condolences Post a Condolence
Nelson Funeral Homes & Crematory